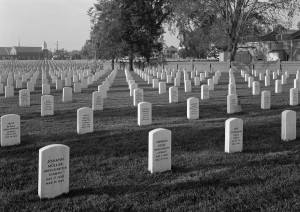 The driver of a stolen car died Wednesday morning after jumping a fence and falling to his death in a cemetery along Highway 238 in San Lorenzo. They say the driver is 40-year-old Paul Giacomoni from Redwood City and add he had an extensive criminal history for weapons and violence among other crimes.  Police have also arrested the passenger in the car.
According to the Alameda County Sheriff’s department, the incident occurred around 1:00am near the San Lorenzo Pioneer cemetery along Hesperian Boulevard.   Sheriff’s spokesperson J.D. Nelson told KTVU, that the bizarre incident began when deputies tried to pull over a stolen vehicle.   The vehicle slowed down but did not completely stop.  Eventually, the vehicle did stop, but deputies say the driver jumped out on the side of Highway 238 and fled.
The driver hopped over a fence on the highway and then fell approximately 30 feet into an area right next to the San Lorenzo Pioneer cemetery. The driver later died at the scene from his injuries.   Another person in the stolen vehicle was not hurt during the incident.  Police have identified the passenger as Gene Shrewberry; he is being held at the Santa Rita jail under suspicion of felony possession of stolen property charge and a misdemeanor drug paraphernalia charge.  However, Shrewbery won’t face any charges for Giacomoni’s death, police say.  Part of highway 238 was closed for several hours while deputies investigated the incident.
KTvu.