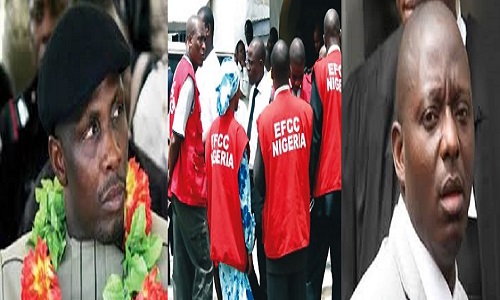 A statement on Wednesday by the spokesman of the EFCC, Wilson Uwujaren said they will be charged over an alleged scam in the acquisition of a property worth N11.8 billion

Uwujaren said the property: “Mieka Dive Institute, a sprawling expanse, purportedly acquired by NIMASA for the take-off of the Nigerian Maritime University, was approved for an outright purchase by the past administration in the sum of N13, 072,564,822.00 in which a sum of N11, 765, 308, 339.80 had been paid through NIMASA”.

The EFCC spokesman noted that the investigations by the commission revealed that the fund was fraudulently claimed through an alleged false presentation of a Certificate of Customary Right of Occupancy of the property and an alleged inflation of the original value of the property.

Uwujaren added that the same property was allegedly wrongly acquired and wrongly purchased, as the Omadino Community of Delta State, the rightful owners of the property, are making a demand for rightful payment of the same land.

Recall that Justice Ibrahim Buba of a Federal High Court in Lagos, last week, issued a bench warrant of arrest on Tompolo following his failure to appear before the court for his arraignment over an alleged N34 billion scam preferred against him, the ex-NIMASA boss and four other persons as well as their companies by the EFCC.

The court consequently fixed February 8, 2016 for their arraignment, the EFCC statement said.