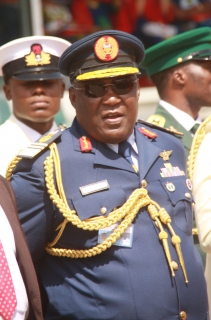 President Muhammadu Buhari in a statement issued on Friday through the Senior Special Assistant to the President on Media and Publicity ordered the Economic and Financial Crimes Commission, EFCC to investigate former Chief of Defence Staff, Air Vice Marshal Alex Badeh, former Chief of Air Staff, Air Vice Marshall Adesola Amosu among others. If you are wondering why Mr President wants them investigated, the details have not be made known yet but just so you are prepared for when the bombshell drops, INFORMATION NIGERIA a couple of things you should know about Badeh…

– Sometime ago, it was reported that the US allegedly pulled out of helping Nigeria rescue the Chibok girls after a confidential discussion with the top Chiefs (which Badeh was one) in which the US plotted to use sleeping gas to raid Boko Haram camps was quickly leaked to the terrorists. News had it at the time that on the next surveillance flights, the US saw Boko Haram members wearing gas masks.

– Badeh made headlines in July 2015, when he confessed while handing over to his successor, Abayomi Olonishakin that when he assumed office as the CDS, he headed an armed forces that lacked the relevant equipment and motivation to fight Boko Haram terrorists.

– Badeh’s confession that he equipped the armed forces earned him the rage of Nigerians, as many questioned why he sent his men to battle ill equipped to face death if truly they were well equipped. Despite the criticisms, Badeh supervised the court marshal of the soldiers who refused to battle without being well equipped and they were sentenced to death.

– On Wednesday afternoon, the Economic  and Financial Crimes Commssion  sealed the residence of the ex-Defence chief in Wuse zone II.

Could it be in connection with Dasukiate? Our fingers are crossed!!!