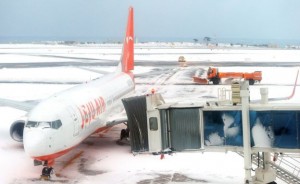 A cold snap sweeping across East Asia has led to more than 50 deaths in Taiwan and stranded at least 60,000 tourists in South Korea. Taiwanese media reported a rash of deaths from hypothermia and cardiac disease following a sudden drop in temperature over the weekend. Meanwhile heavy snow forced the closure of the airport on the Korean holiday island of Jeju, cancelling flights.

The cold spell has also hit  southern China and Japan.  Many of those who died in Taiwan were elderly people living in northern regions such as Taipei and Taoyuan, as well as some living in the southern city of Kaohsiung. The north saw an unusually low temperature of 4C (39F) on Sunday, and many homes in Taiwan lack central heating.

In the capital of Taipei, many victims reportedly had heart trouble and shortness of breath. “In our experience, it’s not the actual temperature but the sudden drop that’s too sudden for people’s circulatory systems,” said a city official quoted by AP news agency.

A 56-year-old man surnamed Chen was found dead on the street Sunday morning, reported Focus Taiwan, but most of the victims in the city and its surrounding region, known as New Taipei City, were found indoors. Authorities have warned people, especially senior citizens, to keep warm and stay out of the cold.