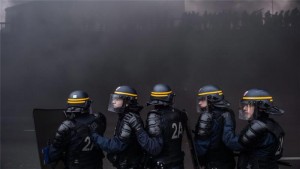 Paris police fired tear gas and taxi drivers lit bonfires on a major highway during nationwide strikes and protests over working conditions and competition from non-traditional services such as Uber. French Prime Minister Manuel Valls agreed to an emergency meeting with taxi drivers on Tuesday afternoon, in an apparent attempt to defuse tensions.

The “Black Tuesday” protests are the latest challenge to the Socialist government as it tries to modernise the economy and find France’s place in an increasingly globalised, online marketplace.  Hundreds of flights were cancelled as air traffic controllers joined civil servants, hospital workers and teachers for the day of strikes.

At Orly airport, one protester was injured in the leg when a shuttle bus forced its way through a blockade. Police said the bus driver was arrested. About 300 taxi drivers, furious over upstart competitors such as Uber, blocked the capital’s ring road at a key intersection in the west of the city, lighting fires and throwing smoke bombs.