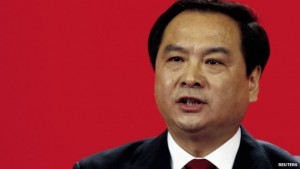 China’s former deputy national police chief Li Dongsheng has been jailed for 15 years for corruption offences, according to state media. Li had ties to Zhou Yongkang, jailed for life in June in one of China’s biggest ever corruption scandals.

The sentence was reported on an official China Central Television social media account. The former deputy security minister stood accused of taking nearly 22m yuan ($3.3m; £2.3m) in bribes. He was also accused of abuse of power in positions he held between 1996 and 2013, according to state media reports at the time.

Li was formally sacked in February last year, after coming under investigation, along with several other former associates of Zhou Yongkang.

Zhou served as China’s security chief before retiring in 2012. The former politician – one of the most senior in China – was convicted of a series of corruption charges, including bribery, abuse of power and leaking state secrets.