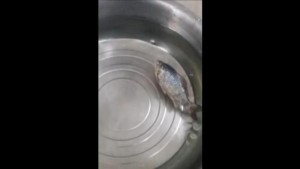 A video filmed in China appears to show a frozen-solid fish defrosting in warm water and returning “to life,” moving and swimming on its own.

The video, reportedly filmed Friday in Jiangsu Province, shows a man remove the apparently frozen-solid fish from a freezer and place it into a bucket with what appears to be a healthy fish.

The frozen fish slowly defrosts in the water for about one minute before starting to move slowly.

The fish gradually starts moving faster and easier until it appears indistinguishable from the healthy fish.

The video has raised numerous questions about its authenticity online, but experts suggested the events on screen are made possible by “antifreeze proteins” in the fish’s body that prevent its cells from being damaged by the process.