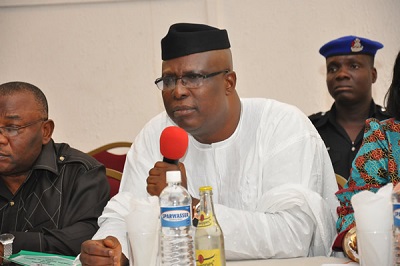 The Action Group caucus of the All Progressives Congress, APC, in Ekiti State has commended President Muhammadu Buhari for appointing the senator representing Ekiti Central in the 7th National Assembly, Babafemi Ojudu, as his Special Adviser on Political Matters.

In a statement by its Spokesperson, Segun Dipe, the group described the appointment as a New Year gift to not just the senator but the entire progressives in Ekiti, saying the entire people of the state see Ojudu as one of their very best.

“We are expressing confidence in him and assuring Mr. President that the Ojudu we know would prove his mettle as a round peg in a round hole.

“The Ojudu we know is a thoroughbred progressive and a conscientised politician to whom service and loyalty mean so much. He is a pro-democracy activist who paid more than his due to achieve democratic governance in Nigeria.

“Two qualities he keeps displaying everywhere he has worked or served are the passion to excel and selflessness. He sees every appointment as an opportunity to serve fellow human beings, be it as a professional journalist or as a career politician.

“We see Ojudu as a passionate citizen, a team player, an astute personality and a very humane fellow.

“He is accessible and down-to-earth. We are very certain that he will not perform any less in this appointment, rather his impact will be greatly felt by the government and the people of Nigeria”, the group said.

Meanwhile, the group called on every Ekiti indigene, particularly the progressive ones, to see the appointment of Ojudu as a collective blessing and another confirmation that quality abounds among them.

“It is a recognition of the values that we hold. Such vote of confidence, which is continually passed on us from time to time as a people with pride and integrity, cannot be rubbished by any negative personality that may be holding our people hostage as of today.

“We must hold firm to our beliefs and continually embrace the spirit of one for all and all for one. We must continue to prove to the world that we are well-nurtured and well-natured”, added Dipe.

Information Nigeria notes that Ojudu, who was the spokesperson of the APC caucus in the Senate between 2011 and 2015, refused to seek re-election.