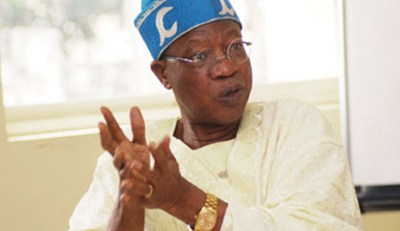 The Minister of Information and Culture, Alhaji Lai Mohammed, has appealed to the police to provide more security cover for vulnerable places across the country in order to prevent attacks by Boko Haram insurgents.

The Minister made the plea when during a courtesy visit on the Inspector-General of Police, Mr. Solomon Arase, in his office in Abuja on Tuesday.

“As we have told Nigerians on many occasions, our military has decimated Boko Haram and uprooted them from the territories they once controlled. What the terrorists are now engaged in are attacks on soft targets, by which I mean highly-vulnerable places like markets, motor parks, as well as worship and entertainment centres, etc.

“Herein lies the important task of the police, the body statutorily given the role of maintaining law and order.

“The police, leveraging its large network, its investigative capacity and the fact that its personnel reside largely among the people, are now required to step in to protect these vulnerable places.

“This they can do by working with transport workers, market women, local government councils and police public community relations councils, faith-based organizations, community development councils and other necessary stakeholders”, he said.

“May I also use the opportunity of this visit to formally convey to the Inspector-General the message from the Broadcasting Organization of Nigeria (BON), when I met with their members last week in Abuja. They asked me to implore the Inspector-General to provide 24-hour police protection, at no extra cost, for the premises of their organizations. I am hereby presenting and endorsing their demand”, he said

The Minister hinged his endorsement of the request by the BON members on the fact that they have agreed to partner with the Federal Government in its National Security Awareness Campaign, an inter-agency campaign being spearheaded by the Ministry of Information and Culture.

According to him, their collaboration with the Federal Government in this important campaign could “make them more vulnerable to possible attacks and aggravate the already tough conditions under which they operate”.

In his response, Mr. Arase said the visit was an opportunity for the police to draw from the vast and fertile experience of the Minister within the national space to enrich policing in Nigeria.

“In this regard, it is particularly appreciated that the Hon. Minister could deploy the broad network of his ministry to support the leadership of the Nigeria Police in advancing the concept of police-community partnership and to aid in enlightening the general public down to the grass roots on their civic responsibilities in relation to national security and crime prevention”, he said.

The IGP disclosed that with the support of President Muhammadu Buhari, the police leadership had commenced projects aimed at enhancing the technical intelligence capacity of the Force with a view to strengthening their operational competence and managing highly-organized crimes, including terrorism and other crimes of national security.

Mr. Arase, therefore, pledged to partner with Federal Ministry of Information and Culture in the public sensitization against terrorism, adding that the police high command would fashion out the modality for the immediate deployment of policemen to provide adequate security for media houses across the country.