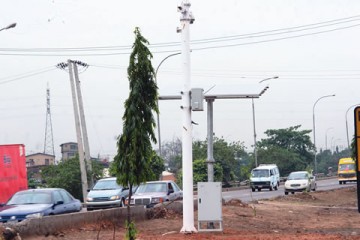 An Ad-hoc Committee of the House of Representatives has revealed that the country has been short-changed in the execution of the $470 million contract for the installation of Closed Circuit Television (CCTV) cameras in Abuja and Lagos, which was awarded to the ZTE Corporation of China by the administration of former President Goodluck Jonathan.

Ahead of a public hearing organized by the committee investigating the projects slated for Tuesday, it was discovered by the panel that the naira equivalent of the money paid to the contractor was “over a trillion naira”.
In a press statement issued yesterday and signed by its chairman, Hon. Ahmed Yerima, the ad-hoc committee recalled how the 7th House of Reps conducted a similar probe in the past, adding that “forces” did not allow the report to see the light of day.

ZTE Corporation was said to have abandoned the projects, which was conceived to provide real-time, on-time surveillance of the nation’s political and economic capitals at the height of Boko Haram insurgency, after collecting an upfront payment of $100m.

This sum, the committee noted, represents about 20 per cent of this year’s N6.08trn budget proposal.

The committee added that the non-completion of the projects has also hampered the capacity of security agencies to gather intelligence on the activities of criminal elements in the country.

“The contract for the installation of CCT cameras in Abuja and Lagos by the ministry of police affairs, is part of a larger project titled, ‘Nigerian National Public Security Communications System, facilitated by an EXIM Bank of China loan.

“The CCTV camera installations is only an integral part of the entire project, which include the installation of 2,000 digital solar-powered cameras, 1,000 each for Abuja and Lagos; 37 switch rooms, microwave backbone; 37 coalition emergency response systems; 38 video conference sub-systems; 37 e-police systems; six emergency communication vehicles; and 1.5million phone lines for subscribers to generate revenue”, the statement said.

Towards getting to the bottom of the alleged fraudulent contract, the committee has already summoned top government officials and other stakeholders including the National Security Adviser (NSA), Babagana Monguno; Minister of Finance, Mrs Kemi Adeosun and Governor of the Central Bank of Nigeria (CBN), Mr. Godwin Emefiele.

The committee assured Nigerians that the investigation would not be about ego or party affiliation but the general good of Nigerians.