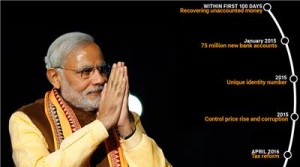 A pre-dawn raid on an Indian air base in the northwestern state of Punjab has ended after a 15-hour gun battle that left all five attackers and three soldiers dead, according to police and security forces. Saturday’s attack, 50km from the border with Pakistan, came just a week after Narendra Modi, India’s prime minister, made an unannounced Pakistan visit to meet his counterpart in a bid to revive bilateral talks that had previously been derailed by armed attacks.

Rajnath Singh, home minister, confirmed that all five attackers were killed in Pathankot.  The defence ministry said there had been intelligence reports about a possible attack on military installations in Pathankot, and that the air force had been prepared to thwart any attackers. “Due to the effective preparation and coordinated efforts by all the security agencies a group of terrorists were detected by the aerial surveillance platforms as soon as they entered the air force station at Pathankot,” the ministry said in a statement.

Intermittent gunfire had continued into the day and helicopters flew as an operations continued to comb the base. Suresh Arora, Punjab’s police chief, said the attackers had earlier hijacked a police officer’s car and driven it to the heavily guarded base. Rochelle D’Silva, Indian Air Force spokesperson, said the men entered the living quarters of the base, but were not able to penetrate the area that houses fighter helicopters and other equipment.

The airbase was cordoned off and a heavy contingent of police deployed to the area, with elite paramilitary force of the National Security Guard (NSG) and the Guard Commando Force called in.