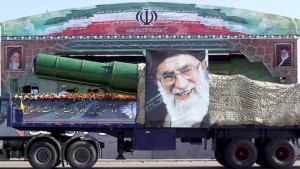 Four American-Iranians were also freed in a prisoner swap as part of the deal. Among them was Washington Post reporter Jason Rezaian – whom President Obama described as “courageous”. A fifth American was freed separately.  Rezaian and two of the others freed flew to a US base in Germany via Geneva for medical evaluation.

Another, Nosratollah ­Khosravi-Roodsari, did not fly out with the others, US officials said. A fifth man, Matthew Trevithick, was freed in a separate process. The US said it had offered clemency to seven Iranians being held in the US for sanctions violations. Negotiations in December over the prisoner exchange delayed the US Treasury’s imposition of the latest sanctions.

They were only announced once the plane containing the former prisoners had left Iran, reports said.  They were triggered by Iran conducting a precision-guided ballistic missile test capable of delivering a nuclear warhead last October, violating a United Nations ban. “Iran’s ballistic missile programme poses a significant threat to regional and global security, and it will continue to be subject to international sanctions,” said Adam J Szubin, US acting under-secretary for terrorism and financial intelligence.