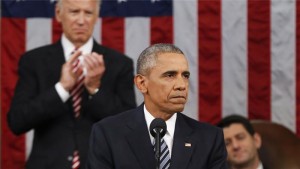 US President Barack Obama has wrapped up his final State of the Union address with a forceful statement of confidence in the future of the United States. “I believe in change because I believe in you,” Obama said in his closing remarks, generating a standing ovation. “That’s why I stand here as confident as I have ever been that the State of our Union is strong.”

Obama also said the US doesn’t need over-the-top claims about the Islamic State of Iraq and the Levant (ISIL) group to show the US is serious about defeating it. The president dismissed the idea that ISIL threatens the US’ existence, saying that’s the story ISIL wants to tell and the message it uses in propaganda to recruit. “Masses of fighters on the back of pick-up trucks and twisted souls plotting in apartments or garages, they pose an enormous danger to civilians and must be stopped. But they do not threaten our national existence,” Obama said.

He said references to World War III just play into the group’s hands.  Criticising Republican presidential frontrunner Donald Trump, Obama said insulting Muslims hurt the US and “betrayed” its identity. “When politicians insult Muslims … that doesn’t make us safer,” he said, drawing applause from the crowd in the House of Representatives chamber. “It’s just wrong. It diminishes us in the eyes of the world. It makes it harder to achieve our goals.”

Obama also criticised those who say ISIL represents Islam. He said that’s a lie, and rhetoric like that has pushed away allies the US needs to win the fight. He was apparently alluding to Republican politicians who have demanded Obama declare war on “radical Islamic extremists”. The president repeated his declaration that the US will hunt ISIL down and destroy the armed group that controls territories in Iraq and Syria.