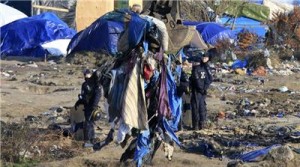 Israeli authorities have demolished several homes in the strategically sensitive E1 region of the occupied West Bank, displacing at least 17 Palestinians, among them children. Israeli troops forcibly evacuated local residents and bulldozers flattened four homes in the Jabal al-Baba community, on the outskirts of occupied East Jerusalem, on Thursday, according to a local spokesman.

“They showed up at four in the morning and removed everyone from their homes – men, women, children,” Daoud al-Jahalin, the spokesman of the Jahalin Bedouin tribe in the neighbouring village of Abu Nuwwar, told Al Jazeera. “There were no journalists there to witness it so they did it all by force, pointing their weapons at people and hitting many of the young men.”

Jabal al-Baba and Abu Nuwwar are among more than 20 Palestinian Bedouin villages – known as the Jahalin communities – in the E1 area of the central West Bank. An estimated 300 people live in Jabal al-Baba, while another 700 live next door in Abu Nuwwar.

Israel intends to demolish those communities and build Jewish-only settlements in their place, effectively dissecting the West Bank into separate halves and eliminating the possiblity of territorial congruity in a potential Palestinian state.