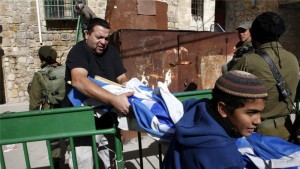 Israeli police have evacuated Israeli settlers from buildings they had raided and temporarily took over in the occupied West Bank city of Hebron, as fearful residents say they have endured intimidation and attacks.  Officers on Friday morning evicted the settlers from two homes of Palestinians in Hebron, a flashpoint city during recent unrest.

Writing on Twitter, Israeli police spokesperson Micky Rosenfeld said police removed around 80 people who had “entered illegally”, adding that there were “no injuries” and the homes were “closed off”.   When the settlers first occupied the buildings on Thursday, many of them attacked Palestinian residents and their homes, according to local media reports.

Reportedly protected by Israeli troops, the settlers broke the doors of several homes and threw rocks at Palestinian residents.  Local resident Shada Haddad, 25, said that clashes broke out between Palestinian youth and Israeli troops when the home owners were blocked by the settlers from entering their buildings.

“The settlers occupied the homes in the Old City, and then the problems broke out between Palestinians and the army,” she told Al Jazeera. “The army was protecting the settlers like they always do,” Haddad added, recalling that soldiers fired tear gas and the crowd of Palestinians who gathered.