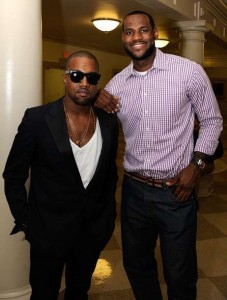 Controversial American rapper, Kanye West is insisting he did not insult NBA superstar, LeBron James in his new song, ‘Facts’.

Kanye, who is accused of slamming NIKE in the song, is now blaming the media for distorting his lyrics to seem insulting to the brand and its ambassador, LeBron.

At one point in the track, which accuses Kanye of saying Nike treats its “employees just like slaves,” West raps that Nike “gave LeBron a billi’ not to run away.”

But West maintains in a tweet on Friday that he was not “downplaying” the basketball star at all.

As noted, a good part of the newly released song ‘Facts’ attacks Nike, with whom West used to work on his Air Yeezy shoe line before partnering with Adidas in 2013.

Among the lyrics are “Nike out here bad, they can’t give [expletive] away.” But Kanye now says he would never insult James, who has a $600 million lifetime endorsement with Nike.

For his part, James said he hadn’t heard “Facts” when recently asked about the song.

Notwithstanding, the NBA star noted, “I’m going to side with Nike no matter who it is… no matter what the situation is.” James added that Nike is simply “family” to him.