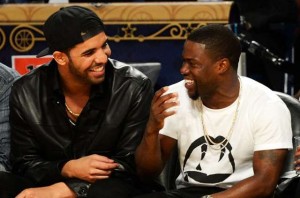 Two superstar celebs, Drake and Kevin Hart, are set to face each other at this year’s Celebrity All-Star Game in Toronto, Canada.

The annual star-studded event is expected to be a North American battle for the baskets.

A pair of star-stacked teams – one representing the United States and one Canada – are set to take the court at this year’s celebrity show down.

On the Americans side, is celebrity comedian, Kevin Hart.

These two are no strangers to basketball: Drake is a global ambassador for the Toronto Raptors, and Hart has been playing in the All-Star game for years – he’s won the MVP award four times.