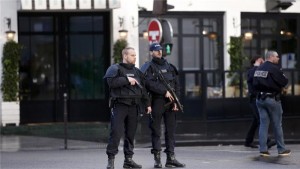 A knife-wielding man wearing a fake explosive belt was shot and killed on Thursday after he entered a Paris police station, French officials said. The shooting came a year to the day after an attack on the French satirical newspaper Charlie Hebdo launched a bloody year in the French capital.

Luc Poignant, a police union official, said the man cried out “Allahu Akbar,” Arabic for “God is great.” A statement from the Paris prosecutor said the man’s body was found with a cell phone and a piece of paper with an emblem of the Islamic State of Iraq and the Levant group and a claim of responsibility written in Arabic.

The statement did not provide more details about the claim. Just a few minutes earlier, elsewhere in the city, French President Francois Hollande had finished paying homage to police officers killed in the line of duty, including three shot to death in the attacks last January.

A Paris police official said police were investigating the incident at the Paris police station as “more likely terrorism” than a standard criminal act. The official spoke on condition of anonymity because he was not authorised to be publicly named according to police policy.