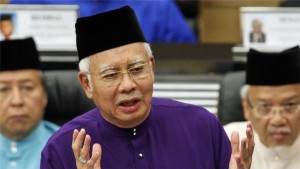 Malaysia’s attorney-general said on Tuesday that $681m transferred into Prime Minister Najib Razak’s personal bank account was a gift from the royal family in Saudi Arabia and there were no criminal offences or corruption involved. “I am satisfied with the findings that the funds were not a form of graft or bribery,” Attorney-General Mohamed Apandi Ali told a media conference.

“There was no reason given as to why the donation was made to PM Najib, that is between him and the Saudi family,” he said.  He said no criminal offence was committed by Najib in relation to three investigations submitted by Malaysia’s anti-graft agency, and no further action would be taken. Najib returned $620m to the Saudis as the money was not utilised, he said.

Najib has been under fire since the donation came to light last July, along with billions of dollars in debt built up by state investment fund 1Malaysia Development Berhad (1MDB).  Despite it all, the prime minister remained steadfast, vehemently denying any wrongdoing, and rejecting calls for his resignation. The scandal has shaken investors in Southeast Asia’s third-biggest economy and rocked public confidence in the coalition led by Najib’s United Malays National Organisation (UMNO) party, which has held power since independence in 1957.