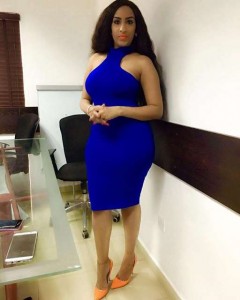 This happened after she posted a picture showing off her eye lashes.

She captioned it, “My love for eye lashes though one of my favorite lashes looks . Human hair lashes… What’s ur favorite kind of eye lashes ladies lets get talking…“

In the words of actor, Femi Brainard, ‘Striking resemblance to the Mona Lisa Portrait.‘

Meanwhile, singer, Timi Dakolo was one of the early ‘likers’ of the picture that has continued to generate more compliments and likes for the Shattered Romance actress.