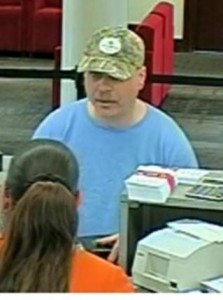 Authorities are seeking to identify a man who robbed a Nashville bank while armed only with a Bible.

The Metropolitan Nashville Police Department said it is working with the FBI to attempt to identify the man who walked into a Bank of America branch about 2:30 p.m. Friday while carrying the holy book.

The man, whom police said did not display a weapon, handed a note demanding cash to a teller.

The suspect fled in an older-model red car. Police said he dropped his Bible on his way out of the bank. Police are asking members of the public to help identify the suspect.