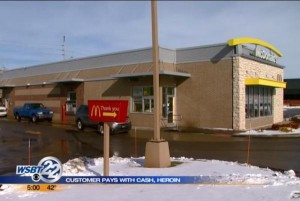 Indiana police said a man paying for his McDonald’s food accidentally handed a bag of heroin to a drive-through worker along with his money. The LaPorte City Police report of the incident said an employee at the McDonald’s in LaPorte took money from a male driver who appeared intoxicated Monday night and she sorted the bills to discover a green plastic baggie containing a “rock-like substance.”

Police said the substance “appeared to be heroin” and later testing confirmed the presence of the drug. LaPorte Metro Operations Coordinator Harlan Williams said police are reviewing surveillance footage from the fast food restaurant in an attempt to identify the three men in the car.

Williams said the man likely handed over the heroin by accident. ”It shows you how significant the problem is here that we’re battling,” Williams told the South Bend Tribune. LaPorte County Coroner John Sullivan said heroin is an epidemic in the area.

“It could be someone dressed in a suit and tie carrying a briefcase,” Sullivan told WSBT-TV. “It could be someone just walking down the street. Everybody thinks you can pick out the drug users and you can’t anymore.” “All the counties in Indiana have their own vices…but here in LaPorte…heroin is still a big, big issue,” he said. “It’s our number one problem right now,” Sullivan said. “It trumps unemployment, it trumps all the political woes we’re going through right now.”