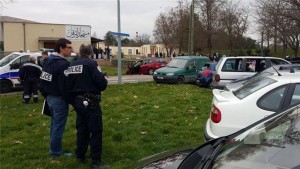 A soldier and an elderly man were injured when a man drove his car at troops protecting a mosque in Valence in southern France, officials said. The injured passerby was a 72-year-old man who was hit in the calf by a stray bullet shot by the soldiers on Friday, Valence mayor Nicolas Daragon told the iTELE news channel.

“The four soldiers were in front of the mosque, a moderate, quiet mosque, in between two prayer sessions, at a time when many worshippers arrived,” Daragon said. “A car drove at them.”  The driver was seriously wounded when the soldiers shot at him during his second attempt at ramming into them, but his injuries are not life-threatening, the government said in a statement. He is said to be 29 years old, from a suburb of Lyon which is about an hour’s drive from Valence, and was not previously known to intelligence services.

The imam of the mosque, Abdullah Imam Dliouah, said in a statement posted toFacebook: “The mosque officials and worshippers are deeply shocked by this act. The soldiers protecting the mosque are appreciated by the worshippers and we condemn this agression towards those who ensure our safety.

“We wish to reiterate that this act, despite its gravity, will not dampen our resolve to promote us living together, as we have always done.” France has been on high alert since the November 13 attacks in Paris in which 130 people were killed by armed attackers who claimed they were linked to the Islamic State of Syria and the Levant (ISIL) group.