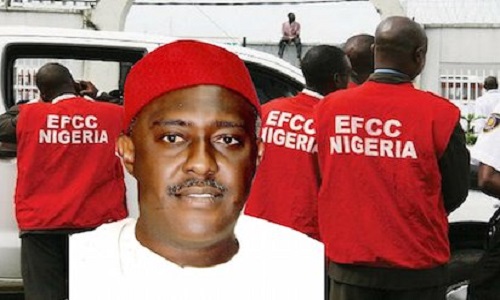 The Peoples Democratic Party (PDP) has said its spokesman, Chief Olisa Metuh is cooperating with investigators at the Economic and Financial Crimes Commission (EFCC).

The admission of cooperation with the anti-graft agency came on the heels of reports that Mr. Metuh tore the statement he willingly wrote while in detention at the commission’s head office in Abuja.

The party said its spokesman has admitted receiving the sum of N400 million from former President Goodluck Jonathan for an assignment he did; although it failed to disclose the particular assignment in question.

The party also said Metuh has indicated his readiness to make public the nature of the assignment, but only in the law court where his statement would not be distorted by anyone.

A statement on Tuesday by Metuh’s special assistant, Richard Ihediwa, lamented what the party termed “untrue reports” in the media, saying the spokesman believed that his continued detention and failure to charge him to court are deliberately intended to prevent him from telling his own side of the story in the open court for all Nigerians to know.

According to Ihediwa, his principal had since informed that sometime in December 2015, the ONSA published an invitation to companies they believed executed contracts for it for a chat, adding that upon ONSA invitation via a text message, Metuh, regardless of the fact that he did not execute any contract for the Office, appeared before the ONSA panel, wherein he presented his company’s statement of account showing that the sum of N400 million paid on the instruction of the ex-president for an assignment was traceable to the ONSA account.

Chief Metuh, had hinted that he did some assignment for the ex-president at a media briefing last year before his eventual arrest by the anti-graft body over a week ago.

“We are therefore worried at the continued media persecution where a citizen is being charged, sentenced and jailed in the court of the media instead of being charged to the law court as required by the law”, the statement said.

“This office urges Nigerians not to lose sight of the sequence and inconsistencies in the investigation and publications regarding Chief Metuh’s case. We believe that in this case, the law must not be suspended but applied in its full measure by charging and allowing Chief Metuh to state his case in the open court instead of this continued media persecution against him”.