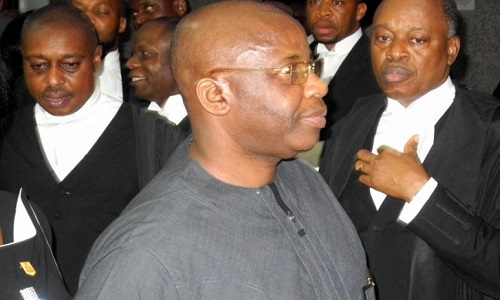 A mild drama played out yesterday in court, stalling the cross-examination of prosecution witness, Abu Sule, in the case involving a former governor of Imo State, Ikedi Ohakim.

During the proceeding, prosecution counsel, Festus Keyamo, alleged that the accused’s son, Emeka Ohakim, went on the trail of the prosecution witness and threatened him (Sule).

Mr. Ohakim is being prosecuted by the Economic and Financial Crimes Commission for allegedly making a cash payment of $2, 290,000.00 (Two Million, Two Hundred and Ninety-Thousand Dollars) for a piece of land at Plot No. 1098 Cadastral Zone A04, Asokoro District, otherwise known as No. 60, Kwame Nkruma Street, Asokoro, Abuja.

Addressing Justice Adeniyi Ademola of the Federal High Court, sitting in Abuja, Mr. Keyamo said prosecution witness 2, Mr. Sule, who is managing director of Tweenex Consociate H.D. Limited, telephoned him about 9.00p.m. on Monday, January 25, saying that the second son of the defendant, Emeka, visited his (Sule) office at Asokoro to inquire about his home address from some individuals.

According to Mr. Keyamo, the younger Ohakim allegedly approached three people, whose names he gave simply as Okon (a driver), Akpabor (a driver) and Shola (an architect), for information on Mr. Sule’s home address.

He said, “We don’t want to distract the court from this trial. But I thought it goes beyond the issue of counsel to counsel because it touches on the administration of justice and protection of the witness concerned.

“We will apply, at this stage that a word of caution and concern go out. If it repeats itself, we shall bring appropriate application before the court over the development”.

However, in his response, lead counsel to the defendant, Chris Uche, SAN, expressed shock at what he described as Mr. Keyamo’s outburst, saying the matter should have been discussed at another gathering rather than in the open.

According to him, “I have no doubt that what the prosecution has said amounts to destabilizing the defence. Keyamo had been sitting directly behind us for more than one hour before the case was called, but he didn’t raise the matter. He also saw the defendant eyeball to eyeball when he came to our seats, yet he didn’t discuss the matter. Now, it is on the Internet and it will be in the press tomorrow”.

The defence counsel, who further urged the court to dismiss the story as unfounded, said the prosecution could file an application on the matter as he had mentioned to the court.

After listening to both counsel, Justice Adeniyi, who was visibly disturbed about the allegation, said there was no harm if the prosecution had hinted the defendant and his counsels about the incident.

“I am a bit disturbed. It is a very serious allegation. We can’t deny the fact that it also touches on the defendant himself. Alternatively, you could have asked to seek audience with me in chambers in the presence of the defence counsel and the defendant”, he said.

The defence counsel further told the court that the prosecution failed to handle the matter properly, adding that his action was not in consonance with a traditional belief that says an elder should report any act of misconduct by a child to his father.

In his reaction, Mr. Keyamo said, “I find it extremely objectionable. He has said things about my person, whereas I have never said anything about him. I will not treat an issue of threat to life in private! There is no rule of legal practice that says such an issue should be discussed in private. It depends on my judgment”.

Consequently, Justice Ademola adjourned the case to Wednesday, January 27 for continuation of trial.