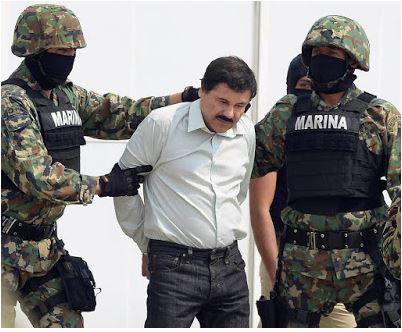 Joaquin “El Chapo” Guzman, one of the world’s most sought-after drug lords, has been captured in his Sinaloa hometown.
Mexican President Enrique Peña Nieto announced Friday.
“Mission accomplished!” the president said via his Twitter account.

He was captured again today at 4:30am in a firefight between his bodyguards and Mexican Marine special forces in the Sinaloa city of Los Mochis, on the Pacific coast and not far from his home, government officials said. Five of his associates were killed, six injured and several captured, the navy said. One marine was wounded.

The special forces were responding to a citizen’s tip regarding armed people in a home when they came under fire, the navy said.

Guzman — a multi-billionaire thanks to his Sinaloa Cartel, which traffics in cocaine and marijuana — escaped from jail in July for the second time, dramatically tunneling his way out of Mexico’s top maximum-security prison.

Guzman’s escape last year was a major embarrassment for the Peña Nieto government, exposing deep levels of corruption and an inability to mete out justice.

The U.S. government lamented Mexico’s refusal to extradite Guzman to the U.S., where he has been indicted in California and elsewhere because of his cartel’s expanding operations. It is likely that Washington will now revive extradition requests.