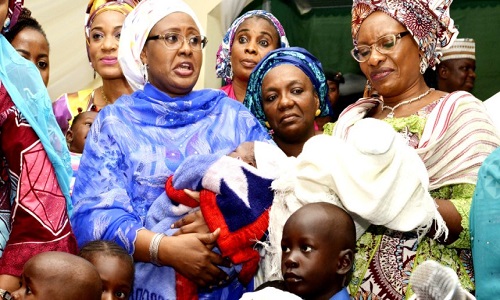 Flagging off the distribution Friday, the Borno State Commissioner for Women Affairs, Hajiya Fanta Baba-Shehu, who represented Mrs Buhari, said that the gesture was aimed at providing nourishing food materials to the beneficiaries who were in dare need of nutrition and healthcare.

“When the President’s wife visited Borno last week, she raised and inaugurated an 11-member high-powered panel on the distribution of all donated relief materials to IDPs in the 26 camps in Maiduguri, Bama, Biu and Benisheikh”, explained the commissioner.

According to the commissioner, as a result the highest population of over 20, 000 IDPs at Dalori, the committee members commenced the distribution of relief materials to pregnant women and other nursing mothers there.

“Over 50 per cent of the displaced persons in camp, comprises of women who are either pregnant or nursing mothers, since the camp was established by National Emergency Management Agency (NEMA) and the state government to resettle all fleeing displaced persons from five councils in the state.

“Over 50 per cent of the IDPs in camp are women and that was why the wife of the President, Aisha was passionate about women and children for the inauguration of this relief materials distribution programme.

“The essence is to touch the lives of the women by providing them with these material”, she said.

Baba-Shehu added that the materials would be distributed to all the 24 IDP camps in the state to provide succour to the affected women.