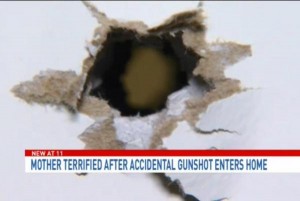 A Maryland mother says she and her 3-year-old daughter were lucky to escape injury when a neighbor cleaning his shotgun accidentally fired into their home. Uzma Khan, 30, a mother of two small children in Upper Marlboro, said she and her 3-year-old daughter had just left the bedroom Jan. 14 when the shotgun blast punched holes in the walls of the master bathroom and bedroom.

“I was shaking. I was crying and just because I couldn’t get the picture of me and my daughter, especially my children, out of my mind, standing there, God forbid, God forbid, getting shot or something,” Khan told WJLA-TV. The Prince George’s County police report said the shotgun was accidentally fired by Khan’s neighbor while he was cleaning the weapon.

“I heard a loud noise and … it sounded like a blast,” Khan told WTOP-TV. “I went into the bedroom and saw the bullet holes and I was shocked.” “I cannot even go into my room because I cannot get the picture [out of my mind] of my kid standing there, because they could have been shot, especially my daughter who was there with me 10 minutes ago,” Khan said.

The police report said Khan’s neighbor apologized and offered to pay for the damage to the home. The man moved his shotgun to a safe in his mother’s home, the report says. Khan said she hopes her neighbor learned a lesson about gun safety. “You’re not a killer, you’re not a murderer, you don’t want to take anybody’s life, but you could have done that,” she said. Khan said she does not believe her neighbor will face charges. Police said the case is being “handled” by detectives and it will be up to prosecutors to determine whether there will be any charges.