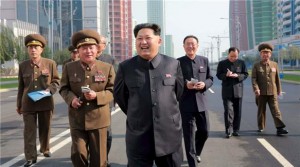 North Korea said it has conducted a hydrogen bomb test in a surprise announcement that sparked regional tension and drew swift condemnation from opponents. If confirmed, the test would be the fourth time Pyongyang has exploded a nuclear device.

Before Wednesday’s announcement, which was made on state television, South Korea’s meteorological agency said the North was likely to have conducted a nuclear test after a 5.1 magnitude earthquake was detected near a known test site in the secretive and isolated state.

South Korea’s presidential office held an emergency meeting and later said the government would take all possible measures in response to the apparent test.  “Our government strongly condemns North Korea ignoring repeated warnings from us and the international community and pushing ahead with the fourth nuclear test, which clearly violated the UN resolutions,” Cho Tae-yong, a senior security official at the South Korean presidential office said.

The US government said it could not confirm a nuclear test but that it would respond appropriately to what it called North Korean “provocations” and that it would continue to protect its allies in the region.  “We have consistently made clear that we will not accept [North Korea] as a nuclear state,” a State Department statement said.