Nasarawa To Sanction Traditional Rulers For Violence In Their Domains 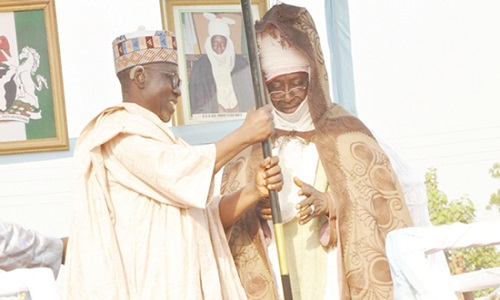 Gov. Tanko Al-Makura of Nasarawa State has warned that henceforth, the state government would sanction traditional rulers and other stakeholders in the event of any outbreak of violence in their domains.

Al-Makura gave the warning on Saturday during an inspection tour to Kwandare in Lafia Local Government Area of the state.

The governor said that government was highly disturbed by the renewed violence in Udeni Gida and surrounding villages in Nasarawa Local Government area of the state.

He said government would continue to ensure inclusiveness in its approach, in ensuring peace across communities in the state.

“To achieve the desired result, all traditional rulers and stakeholders should meet with their people from time to time, to address grey areas capable of disrupting the existing peace”, he said.

He said that government would not fold its arms and allow individuals or groups to cause disharmony that could lead to the loss of lives and property.

The governor added that government would evacuate Fulani herdsmen and their cattle from areas that do not belong to them and warned farmers to desist from taking laws into their hands.

He also warned the people of the state against poisoning cows, and warned that anyone caught in such erroneous acts would be dealt with accordingly.

He pledged government’s assistance to communities displaced by the recent violence in Udeni Gida, Udeni Magaji, Kpana and surrounding villages to enable them returned to their places of abode.

The governor, who regretted the occurrence of the recent crisis, advised the communities to be law abiding.

He said proactive measures had been taken by government to ensure peaceful co-existence among the people. (NAN)