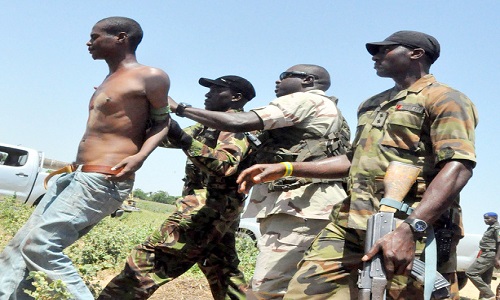 A middle-aged man suspected to be a member of the Boko Haram sect has been arrested by officers of the 19 Battalion of Nigerian Army in Sapele, Delta State.

The suspect, Bukar Abacha, was arrested shortly after he arrived the popular Hausa quarters in Sapele.

A senior army officer, who spoke on condition of anonymity, said on Thursday that a member of the Arewa community gave the information to “Operation Pulo Shield”.

The Borno-state born suspect was, thereafter, handed over to the Army Headquarters in Abuja for further interrogation, the senior officer said.

The officer said that the suspect was on the wanted list of the army.

He said that a sensitisation exercise tagged “show of force confidence building patrol” had been inaugurated.

“The exercise is aimed at disarming all acts of criminalities such as, kidnapping, pipeline vandalism, illegal oil bunkering and killing of innocent citizens in the area.

“Before the arrest, community leaders informed us that the suspect was looking strange, psychologically imbalance and uncomfortable in their midst that called for his doubt as one of them”, he said.

The officer urged the people to give the army necessary intelligent information that would assist to effectively stamp out crime in the society.

He urged residents to report people with questionable character or strange movement of persons in their domains.
The News Agency of Nigeria (NAN) reports that the army pasted lists of names, containing 100 wanted Boko Haram suspects in some strategic places in Sapele metropolis. (NAN)