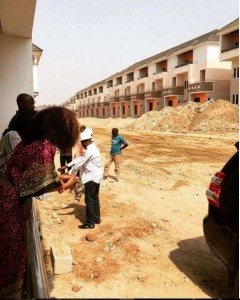 Veteran Nollywood screen goddess, Genevieve Nnaji is highly regarded as one of the richest celebrities in Nigeria.

Genevieve can be described as a multi-millionaire raking in lots of money from acting and endorsement deals.

It seems like the single mum has not branched into the Real Estate business.

Today (January 6), the 36 year old actress shared a photo of her in front of a block of apartments in Apo Dutse, Abuja.

In the photo, it’s clear to see construction work going on in the estate.

Genevieve Nnaji captioned the picture “#sticksandstoneshomes” which might be the name of her real estate company.
In 2014, Genevieve Nnaji launched her clothing line called St. Genevieve. Last year the Nollywood queen went into movie production as she produced the movie ‘Road To Yesterday‘.

Genevieve Nnaji’s father turned 80 last year and she threw him a birthday party in December at her village in Imo state.