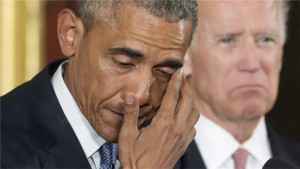 A visibly emotional President Barack Obama – at one point wiping tears from his cheek – unveiled his plan to tighten control and enforcement of firearms in the US, using his presidential powers in the absence of legal changes he implored Congress to pass. Obama on Tuesday accused the gun lobby of taking Congress hostage, but said “they cannot hold America hostage”.

He insisted it was possible to uphold the second amendment while doing something to tackle the frequency of mass shootings in the US that he said had become “the new normal”.

The much-debated second amendment of the constitution guarantees the right of citizens to own firearms, which have killed more than 100,000 Americans over the past 10 years.

“This is not a plot to take away everybody’s guns,” Obama said. “You pass a background check, you purchase a firearm. The problem is some gun sellers have been operating under a different set of rules.” Obama’s actions ensure that gun rights – one of the most bitterly divisive issues in America – will be at the forefront of the 2016 presidential campaign, which begins in earnest next month with the first primary contests.

Accusing Obama of gross overreach, many of the Republican presidential candidates have vowed to rip up the new gun restrictions upon taking office. Democratic frontrunner Hillary Clinton said she was proud of Obama’s efforts and promised she would safeguard them, the AP news agency reported.