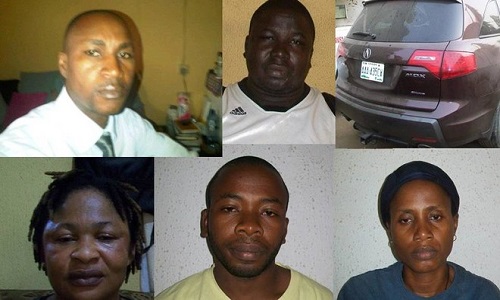 At least five persons have been arrested and an official of the National Drug Law Enforcement Agency (NDLEA) is believed to be under investigation over allegations of conspiring to import cocaine from Brazil.

The official, identified as Ali Baba Adamu, began facing investigations after a luggage abandoned at the Murtala Mohammed International Airport, Lagos was found to contain more than two kilos of cocaine.

Chief executive of NDLEA, Roli Bode-George, said the agency was “following every lead professionally and will exploit more opportunities towards getting every culprit arrested.

“We have also expanded the scope of our investigation and everyone involved in this illegal importation of narcotics shall be diligently prosecuted. The Agency will continue to uphold the rule of law and dislodge drug trafficking organisations in the country”.

The NDLEA commander at the Lagos airport, Ahmadu Garba, said the cocaine seized at the airport is the first this year.

The luggage, tagged for Agina Fidelis Ejike, was abandoned at the arrival hall during inward screening of passengers on an Emirates flight on December 28.

“On January 1, 2016, one Egbuche Fidelis Osita came with authority letter mandating him to collect the bag. In the process, some white powdery substance weighing 2.24kg that tested positive for cocaine was discovered”, said Garba.

“The drug was neatly packed in four parcels concealed in false bottom of four female handbags”.

The narcotics agency NDLEA says its preliminary investigations indicate Ijeoma Ojukwu, 48 and a mother of three, who runs a restaurant in Brazil, is suspected of belonging to an international drug trafficking syndicate.

She is alleged to have conspired to collect the abandoned luggage from the airport in hopes of retrieving the cocaine before she was arrested.

Officials also impounded an Acura MDX said to have been driven to the airport by the suspects.

Denying her complicity in the trafficking of cocaine into the country, Ojukwu said, “My brother came from Brazil and could not find his bag. It was in the process of trying to get the bag out that we were arrested”.

Uche Igwelo, 36, a public administration graduate, said she was invited by Ijeoma to assist in collecting the bag.

“I sell kitchen utensil and I am married with a child. Ijeoma met me that I should help her to collect a bag at the airport. We were trying to get the bag when NDLEA officers arrested us”, Igwelo, an Anambra native, told investigators, according to an official statement from NDLEA.

Egbuche Fidelis Osita, a 37-year-old student said that he was simply asked to collect the bag.

“I am a 400 level student studying English Education at the Ekiti State University. My friend Victor Umeh was the person that asked me to help in claiming a luggage at the airport.

“We all drove to the airport where I was given a letter of authority and other documents of the passenger that came with the luggage. In the process of trying to collect the bag I was arrested. This is all I know about this incident”, Osita said.