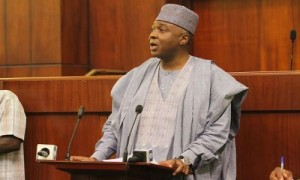 Dr. Abubakar Bukola Saraki is one of the unassuming personalties we have in the political circuit. This predates back to his emergence as Governor of Kwara State for two terms when he first defeated an incumbent governor and later moved against his father’s wish to run for a second term. He was briefly around as Special Assistant on Budget in the office of former Vice President Atiku Abubakar. This to me speaks volume of the current task ahead as he took that position after a long military rule, and now he leads an arm of government part of whose constitutional responsibilities is appropriation.

His emergence as Senate President of the 8th Assembly even though against the party’s wish, the way and manner of his emergence showed he understands the undaunted task ahead and ready to go for it. This am sure informs why he refused to be cowed, and moved against all odds to vie for the seat under a controversial situation. No doubt, the scenes that followed suite are enough indications that some section of the ruling class were not comfortable with him as they see all his move as political not minding the fact that he no doubt has an agenda to first and foremost make the Legislative arm of government which he leads to be independent of the Executive. Even though, they still need to work together for benefit of all, their is need to ensure independence of the various arms of government. This role am sure he is poised to do as it is the only way we can have the desired outcome from the various inputs at several levels.

Since his historical emergence as Senate President of the Senate, position that made him Chairman of National Assembly, his activities has shown that he has a date with history. The swift passage and approval of the 2015-2018 Medium Term Expenditure Frame Work and Fiscal Strategy which precedes the budget presentation and his call for need to dully implement fiscal responsibility act as passed and signed into law shows that he has value to add as leader of that arm of government.  He has made several historical remarks which can be used to engage him over time even when their was seemingly persecution case against him, he didn’t use that to negotiate for the constitutional assignment he has to deliver on. In his welcome address to his colleagues and by extension the nation reads in part and i quote ‘we started the journey to change the way we make laws by seeking to set for ourselves priorities and aspirations designed to ensure that the activities of the 8th Senate impacts positively in the lives of our people. Our vision is to substantially enhance the economic wellbeing, liberty and safety of our people. It is my earnest hope that the period of recess just concluded has afforded us all more opportunity to reflect on this enormous task ahead as we now enter into the business of delivering on our agenda. 2016 must be a year of transparency and delivery’. He went further to urge his colleagues to ensure thorough interrogation, and swiftly consider the proposed budget so as to ensure prudence, fairness, integrity and timeliness. Knowing the task ahead, he went further to say ‘we must demonstrate that a strengthened democracy can be used for the betterment of everyone. People must see and feel the impact of the laws we will pass in their communities, on their streets, and in their pockets’. He also call for public participation when he said ‘while we may do all within our power, we will not be successful as possible without the support and encouragement of the general public. I therefore enjoin the public to work with us and bring our attention to issues of corruption and impunity’.

These are some of his words on the marble, which shows his preparedness for the task ahead. However, one thing keeps worrying me, i hope politics won’t derail this lofty idea based on the pending case of names calling which if not handled properly will derail the whole efficacy of the speech rendered. It’s thus based in this premise, that I urge the Senate President not to relent on making the Senate, chamber of the people as they were elected to represent their people. The National Assembly must be made to become the real chamber of the people, where people’s engagement will be encouraged and always ensure that people are first. The task ahead is enormous, and if he derails based on internal pressure, it is the people whose mandate he represents that will suffer the more. We thus need to quickly create differences between political party and deliverables to the people. Ensuring and making sure the 2016 budget is passed swiftly and greatly monitored for implementation and required performance is key and main desire of the people.

It is thus our expectations that since history has produced him as Senate President at this critical period in our history, the country is looking up to him for a clear legislative agenda that will transcends speech and ensure in his words ‘people feel and see it’. Legislations that will safeguard the dying small scale industries, that will save and promote with enforcement of girl child education, that will ensue strict rule of law is adhered to in all facets of our polity, that will guide our investors against harsh economic periods and at same time seek to protect the consumers. And above all, one that will translate to food on the table and not mare projections is the expectation of the people of the country at this critical period. It will also be important that in fulfilling the call for people to participate in the act of law making, a periodical mid term assessment report and converse with relevant members of the third sector of the public should be prioritized. This will open up the senate and put an end to the simile classified activities. By doing this, the perception of the people will change about members of the National Assembly and people will see the chamber as giving clear needed leadership.

Adelaja Adeoye is a blogger, Political/Social commentator who writes from Lagos Nigeria.