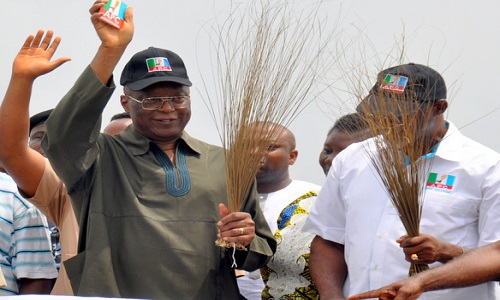 A former Governor of Edo State, Prof Oserheimen Osunbor (SAN), has said the All Progressives Congress (APC) will win the forthcoming governorship election in the state by a wide margin, if he is nominated as the party’s candidate.

Osunbor expressed the confidence that no other party would be able to field a candidate who would match his records.

The ex-governor spoke in Benin, the state capital, when he declared his intention to contest on the platform of the APC.

He offered to be assessed on his antecedents and performance rather than on zoning.

Osunbor said the 2012 governorship election proved that candidates from other senatorial districts, other than Edo South, could win the governorship poll.

He also said he has built a reputation for excellence, integrity, hard work and a track record of achievements.

According to him the former governor, he waited for some time to declare his intention because of his respect for Governor Adams Oshiomhole, who he said appealed to aspirants not to distract governance in the state.

He, however, debunked insinuations that he joined the APC after the presidential election, saying he campaigned for the defunct Action Congress of Nigeria (ACN) in 2013, prior to its change into the present APC.

He said: “I am an academician and intellectual; an outstanding legislator and a law reformer with a legacy of impressive performance in governance.

“Edo State voters have demonstrated in the past that they vote on the basis of track record of performance by the candidates rather than by geography or any other primordial consideration”.

Osunbor was a two-term senator representing Edo Central between 1999 and 2007 until he was elected Governor of Edo in 2007 on the platform of Peoples Democratic Party (PDP).

His stint as governor was short-lived as the Governorship Election Tribunal nullified his election and asked the INEC to declare Mr. Oshiomhole of the then Action Congress as winner of the April 2007 guber polls.

A federal Appeal Court sitting in the state capital in November of 2008 upheld the ruling of the petitions tribunal declaring Oshiomole to be the Governor of Edo State.