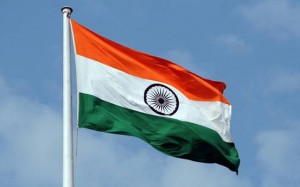 A Pakistani man has been arrested for hoisting the flag of arch rival India on his roof, an act police described as “anti-state” but which the accused says was a tribute to Indian cricket captain Virat Kohli, officials said on Wednesday. Yahoo news reports:

Umar Draz, from the eastern Pakistani district of Okara in Punjab, was charged under the Pakistan Penal Code, which is reserved for crimes considered contravening Pakistan’s sovereignty and carrying a sentence of up to 10 years in prison. Police said they received information on Monday that Draz had hoisted the Indian flag. He went on the run, but police managed to find him on Tuesday.

“It’s illegal to hoist the flag of another country,” police officer Ismail Khan said. “Yesterday he was presented before a local court and sent to jail” while he awaits trial. The detained man told the media that he is a fan of Kohli, who secured India’s victory in the Twenty20 International against Australia this week. Police confirmed that Draz had photographs of the cricketer all over his house.

Majority-Hindu India and majority-Muslim Pakistan became two different countries in 1947 when they became independent of Britain. They have since fought three wars and both claim the disputed Himalayan region of Kashmir. Protesters in the Indian-administered part of Kashmir are regularly arrested for hoisting Pakistani flags and chanting slogans in support of Pakistan.