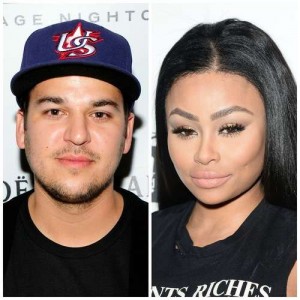 Kardashian outcast, Rob Kardashian and his new woman, Blac Chyna have made their first official appearance together.

The controversial couple was photographed on January 27 driving near Blac Chyna’s home in Tarzana, California.

He was seen wearing a Los Angeles Dodgers baseball cap and appears to have grown a beard.

Diminutive Blac can only be seen from the nose up, and once she spots cameras snapping away she tries to cover her face.

The youngest Kardashian didn’t make any attempt to hide himself once he realized they were being photographed, while Blac got a good hard look at the paparazzi and made a half-hearted attempt to hide her face with her amazingly manicured hands.

On Tuesday afternoon, January 26 , Kardashian was pictured arriving at his new girlfriend’s home amid claims he has moved in with her.

Rob has taken the relationship to the next level after he was allegedly kicked out of his older sister Khloe’s house for striking up a romance with Blac, 27.

“The drama continues. Rob still has some of his things at Khloé’s house. He hasn’t arranged to pick it up. Khloe knows that he is living with Blac Chyna. Khloe feels very betrayed. She always stood up for Rob and defended him. She has gone out of her way a million times to help him. She is very frustrated at the lack of respect for his family,” a source tells People magazine.

And on Wednesday morning, Rob posted a close up photo of his new love on Instagram, showing her without make-up and with a peaceful expression on her face.

On Chyna’s part, she posted a sexy photo of her self posing on a couch showing offf her sexy curves. “Waiting on Zaddy like…” she captioned