One month after losing her husband, the widow of a policeman, Mrs Philomena Asuquo, has committed suicide in Lagos. 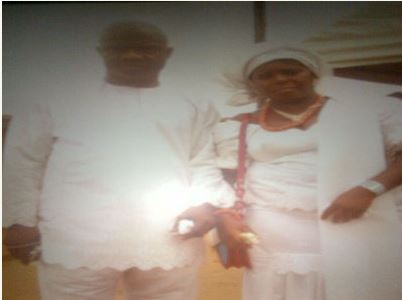 The incident occurred at the Police Barracks on Sagamu Road in Ikorodu on New Year’s Eve.

The late Mrs Asuquo, whose late husband, Inspector Uwem Asuquo was yet to be buried, was said to have drunk sniper, an insecticide, out of frustration.

According to her 19-year-old son, Shadrach, who rushed her to the Ikorodu General Hospital, she had been depressed since her husband died last November.

He said he ran into his mother’s room, after perceiving an insecticide’s odour around the living room and found her writhing in pains.

Shadrach told The Nation on telephone that he and his younger brother, Daniel had gone to their aunt’s place to help her clean her new apartment, adding that they found their mother watching television when they returned.

Shadrach said: “She has been depressed since my father died in police custody but she has never attempted suicide.

“That day I and my brother went to my aunt’s place to help her wash the house because she was moving to their house in Ikorodu.

“When we got back, she was sitting in the parlour watching television.

“I went to the toilet; when I got back to the sitting room, I started perceiving the odour of the insecticide.

“Then, I ran into her room and saw her on the floor holding her stomach. Immediately I took her to the hospital where she died.”

The late Inspector Asuquo was attached to the Area ‘C’ Command in Surulere, Lagos Mainland.

His older brother, Peter, said the family was awaiting police directives on his funeral, since he died in service.

“My brother was serving at Orile before the incident that led to his detention. He was involved in accidental discharge; he fled but turned himself in two days later.

“He was healthy and did not show any sign of sickness. But surprisingly, one of my brothers called me that day that I should leave whatever I was doing and come to the station.

“By the time I got there, he has already been taken to a hospital and he was vomiting some things that I cannot explain.

“He died that same day and the police conducted autopsy on him, which showed that he had hypertension and diabetes.

“My brother was not dismissed because his second wife told us that they received alert for the payment of his November and December salaries.

“I just want to beg the police to conclude all processes and pay his pension and other entitlements so that his children (three) as well as his aged father do not suffer unduly,” he said.

Police Commissioner Fatai Owoseni said the issue had not been brought to his notice, adding that there are laid down procedures for all cases.