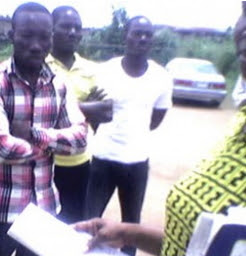 An Ikeja Magistrates’ Court in Lagos yesterday remanded three siblings for supposedly whipping a pregnant mother.
The accused are a tailor, Yusuf Oloyede, 25; an artisan, Ganiyu Oloyede, 18; and a fashion designer, Riliwan Oloyede, 28. Judge A.O. Gbajumo, remanded the siblings in the police custody and adjoned the case till today for notice.
The trio, who reside on Church Street at Obawole in Ogba, Lagos, were arraigned on a two-count charge of conspiracy and assault. Prosecuting police Corporal Michael Unah said that the accused committed the offence on Saturday at their residence. He said the accused conspired to assault the expectant mother, Mrs Maria John. “The accused beat up their neighbour not minding her condition,” he said.

“The accused went to pick cutlasses and was chasing the complainant’s children to machete them following which the complainant rushed to the station to report the matter. “While at the station, he received a call from his daughter that the accused persons have descended on his pregnant wife and beaten her into coma.  “He rushed home to meet his wife in coma, stained with blood all over her body, she was rushed to the hospital and she delivered on Monday through Caesarean section,” he said.