One Taiwo Tosin, an expectant mother, who has reportedly spent four days in detention at the Surulere Police Station and was denied bail by the Investigating Police Officer, IPO, suffered a ruptured womb on Tuesday as she reportedly collapsed in police custody. 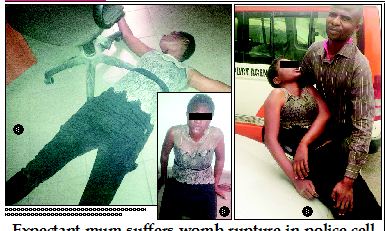 According to reports, Tosin was arrested last Saturday at Meiran Market over N4.2million she owes one Ajibola Abudu, a businessman.

The woman, who is reportedly battling to save her unborn baby following a womb rupture, told The Nation that she spent four days in detention at Surulere Police Station and was denied bail by the Investigating Police Officer, IPO, Mrs. Louisa Njoku, who claimed to be acting on “orders from above.”
Tosin who claimed to have bled for two days in police cell, said she was rushed to Randle General Hospital in Surulere, where it took doctors two hours to revive her.

She said, “I am eight-weeks pregnant, my scan result shows there is a rupture in my womb.”

Speaking further, she said she suffered breath seizure in detention.

“I was locked up for four days without bail. I bled on Saturday and Sunday. I also told the policemen that I was not feeling well but nothing was done.
“I was taken to Randle General Hospital but I left there on Tuesday evening. I am now at a family hospital in my area, Agbado Ijaiye, where I have done scan and they said there is a rupture somewhere in my womb.

“It must have been caused by my inability to breathe while inside the cell. I could not cope there, I suffered breath seizure. The toilet was dirty and the stench in the cell was unbearable. It was choking. There was even no water to bath or anything. The experience was horrible.”

“I borrowed money from Abudu to do business last May but I was duped. He has given deaf ears to all my pleas on paying him as soon as I can but he insisted that I should pay the money once.”

Her husband, Olusola Taiwo, said the IPO disobeyed the order of Area C Commander, Tajudeen Bakare, an Assistant Commissioner of Police, ACP, to release her.

According to Taiwo, “The IPO refused to release her and did not charge her to court. I told the IPO that my wife was not feeling well but she refused to listen.

“The IPO said she will not grant her bail due to instruction from above. I believe the complainant gave the instruction. That is why he brought the case to Surulere Police Station where he knows officers.

“One of the officers, who arrested her at Meiran, boasted that she would rot in jail.

“He brought police to arrest her on Saturday and detained her at Surulere Police Station. All efforts to secure her bail proved abortive as the IPO told us there was instruction from above not to grant her bail.”

Taiwo said after he failed to secure his wife’s bail on Sunday and Monday, he went to see Bakare, who called the parties and pleaded with Abudu to accept the payment plan.

“But the complainant refused insisting on complete payment, otherwise, my wife should be charged to court. When the Area Commander saw that he was not cooperating, he ordered the IPO to release my wife since the case was a civil matter, but his directive was not followed by the IPO who restated there was an ‘order from above’ to detain her.

“Because of our insistence, the IPO said she would be charged to court on Tuesday morning. We went to the station early in the morning and waited for that to happen. It was in the course of waiting that my wife fainted.

“We rushed her to Randle General Hospital with the IPO in the vehicle and it took about two hours before she was revived.

“I was called to come to the station and sign for her bail while she was still at the hospital,” the victim’s husband added.