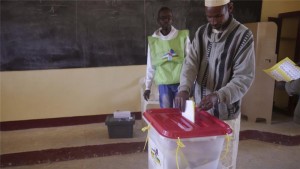 Some 20 of 30 presidential candidates in the Central African Republic’s election have called on authorities to stop counting the votes, alleging fraud. They made the demand at a news conference on Monday, after nearly 40 percent of the ballots had been counted. Central African Republic citizens voted on December 30 in much-delayed national elections that it was hoped would bring stability after two years of ruinous communal violence.

The candidates said the electoral process was marred by fraud, and that the population would question the results. Signatories include heavyweight candidate Karim Meckassoua , a former foreign minister from the minority Muslim community, who had been seen as a pre-election frontrunner.

According to provisional results, Faustin Archange Touadera, prime minister from 2008-2013, had 30,999 votes followed by another former prime minister in second place, Anicet Georges Dologuele, with 28,162.
More than 1.8 million people were registered to vote at more than 500 polling stations nationwide that were secured by UN peacekeepers and national security forces.