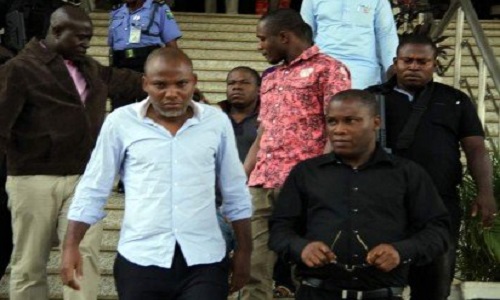 The pan Igbo socio-cultural organization, Ohanaeze Ndigbo, has pleaded with President Muhammadu Buhari to release the incarcerated director of Radio Biafra and leader of Indigenous People of Biafra, IPOB, Mr. Nnamdi Kanu to Igbo leaders, assuring that they would make him realize the futility of calling for secession from Nigeria.

Mr. Kanu, who holds dual citizenship of Nigeria and Britain, was arrested last October by the Department of State Services and has been in its custody since then.

The Federal Government is prosecuting the IPOB leader on treasonable felony.

Speaking with reporters in Awka, the Anambra State capital yesterday exactly 90 days after Kanu was picked up by the DSS in Lagos, Chairman of state presidents of Ohanaeze in the seven Igbo-speaking states, Dr. Chris Eluemunoh, said Igbo leaders were equally concerned with the security challenges posed by the activities of the pro-Biafra group.

He pledged that if Kanu is released to Igbo leaders, they would sit him down and discuss with him and make him realize the negative effects of continuing with efforts to actualize a Biafran Republic.

According to Eluemunoh, a lot of discussions on how to tackle the issue of insecurity in the country were going on among Igbo leaders, adding that they believe that Kanu’s issue could be better handled and resolved if he was released to enable Igbo leaders wade into the matter.

He said: “IPOB and MASSOB (the Movement for the Actualization of the Sovereign State of Biafra) can operate as pressure groups and not as secessionist groups. Many Igbo people are residing in other parts of Nigeria and there is no way they can abandon their investments to return to the East in the name of Biafra”.

He, however, commended IPOB for ending their protests that grounded many cities in the East last year, assuring them that they would stand to gain more if they adopted dialogue in their approach to national issues.

The Ohanaeze leader, who also spoke on the recent statement credited to the Enugu-based Catholic priest, Reverend Father Ejike Mbaka that some people were planning to assassinate the president, described the statement as reckless.

“Mbaka should face his evangelism work as a priest rather than creating panic in the country. If he received any revelation, the better thing for him to do is to keep it to himself and pray to God to avert such a thing. The president is the Commander-in-Chief of the country’s armed forces and is capable of securing himself and we see the statement by Mbaka as a distraction”, Eluemunoh said.

He also declared Ohanaeze’s support for the present administration’s war against corruption, saying that by the way it is going, sanity would soon be restored to the country’s socio-economic life.