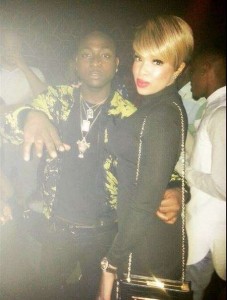 Just yesterday (January 25) news hit the net that Wizkid has welcomed a baby boy from a video vixen named Blue Diamond based in the Unites States of America.

The baby-mama had since said the boy’s name is Ayotunde Balogun Jr named after Wizkid. The Star Boy act has since denied fathering any child in a press release issued yesterday.

Blue Diamond who lives in America but is from Guinea, seems to have links with a lot of male celebrities.

She was also at Wizkid’s Industry Nite show in Houston last May.