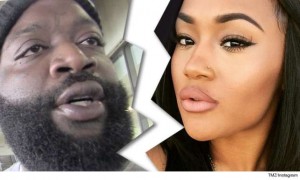 The on and off couple, who got engaged in August 2015, have reportedly been having problems in their relationship.

They reportedly split back in November but got back together posing for a photoshoot in Paper magazine a month later.
In a recent interview with ‘Global Grind’, Galore confirmed she’s officially single again.

“I think the initial breakup was a combination of everything from people digging up tweets when I was 17-years-old tweeting about different people, to the picture of Meek,” she said, referring to an old photo of herself and Rozay’s labelmate in the club.

“I went to his (Ross’) tagged photos one day and it was only that picture of Meek, and it was just that photo. Everybody just kept posting it and I felt like as a man, he just couldn’t handle it when it was just nothing. I feel like during that time apart he realized he was tripping, so we got back together,” she continued.

As for why they’ve finally called it quits, she said, “We just decided to go our separate ways. I’m 22 and this was my first time in love and I put it out there. I’m still in love with him, but some things don’t go as you would like them to go.”