Operatives of the Rapid Response Squad (RRS), of Lagos State police command have arrested two suspected members of a traffic robbery gang that operates on motorcycle, in the metropolis on New Year eve. 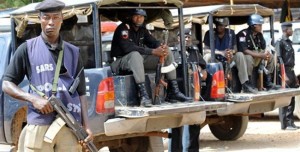 The duo of Odunayo Mustapha and Adedayo Akinjola were nabbed along Lekki – Ajah express way.

The RRS bikers on patrol duty were alerted after the duo had successfully snatched a mobile phone from a woman.

The Police authority revealed that the suspects were nabbed while trying to escape with their motorcycle.

We were able to intercept the fleeing robbers when their victim, a young lady, screamed that her mobile phone had been snatched. Immediately, we gave the fleeing suspects a chase which led to the arrest of two of them while the third suspect later identified as Lekan made away with the stolen phone”, one of the policemen said.

In their statements at the RRS headquarters in Alausa, the suspects confessed that they were a three – man gang who usually robbed in traffic gridlock along Lekki – Ajah corridor.

The leader of the gang, Odunayo Mustapha, who hails from Ijebu-Igbo in Ogun state, said that he was lured into the crime due to financial predicament.

He disclosed to the Police that the woman’s phone attracted his attention when he peeped into her car while on the bike.

According to Mustapha: “Three of us left home in search of our would-be victims. On getting to Ajah opposite a shopping mall , where traffic is usually heavy, we sighted a woman in a car holding a phone, then, I alighted from the motorcycle while my two other members were standing by on the motorcycle. I forcefully collected the phone from her and mounted the motorcycle, then we zoomed off. While on the run, we sighted the RRS men chasing us in which they outran us but one of us disembarked and took to his heels with the stolen phone, while we were arrested “ , he revealed.

The second suspect, Adedayo said,” before now, I was learning aluminum work but I could not complete it due to financial constraint. We just started the act of robbery in the area. And this was our third operation. The motorcycle we use belongs to the third suspect who is now at large”, he said.

The command spokesman, DSP Joe Offor confirmed the arrest of the suspects and added that efforts were on to arrest the fleeing suspect.