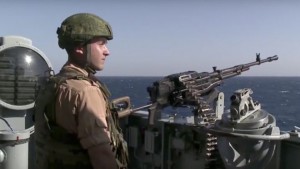 Russian President Vladimir Putin has signed an updated national security paper describing Nato’s expansion as a threat to the country. The paper says Russia’s “independent domestic and foreign policy” has triggered a “counter-action” from the US and its allies.

It accuses these countries of striving to dominate global affairs. The conflict in Ukraine, which began in 2014, has led to a sharp deterioration between Russia and the West.

The updated National Security Strategy signed by President Putin on Thursday is the latest in a series that are critical of Nato. In 2014 Russia announced it was altering its military doctrine to take account of the Ukraine crisis and Nato’s presence in eastern Europe.

Kremlin adviser Mikhail Popov said at the time that Nato’s enlargement in recent years meant the alliance was getting closer to [Russian] borders and presented an “external threat” to his country. Albania and Croatia joined Nato in 2009. In 2011, the alliance recognised four aspiring members – Bosnia, Georgia, Macedonia, and Montenegro.