Rwandan President To Run For Third Term In Office 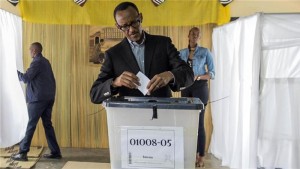 Rwandan President Paul Kagame has declared he will run for a third term in office after his second seven-year term expires in 2017. The announcement in his end-of-year message on Friday follows last month’s constitutional referendum in which 98.3 percent of Rwandans voted to approve the country’s revised Constitution to allow Kagame to run again after his term ends. The move has been opposed by the US.

“Given the importance and consideration you attach to this, I can only accept.” But, he added, “I don’t think that what we need is an eternal leader.” Kagame became president in 2000 after being Rwanda’s de facto leader since the end of the country’s genocide in 1994.

He is credited with stabilising the country and promoting economic growth after the mass killings, but critics say he is an authoritarian ruler who does not tolerate opposition and he is accused of human rights abuses. Senate head Bernard Makuza has said previously that Kagame, whose current term ends in 2017, could run for another seven-year term and then two five-year terms, possibly keeping him in power until 2034.

“But it all depends on his will,” he said.  Kagame is the latest long-serving ruler in an African country to attempt to extend his hold on power. Similar moves have already sparked violence and instability in countries like neighbouring Burundi and the Republic of Congo.