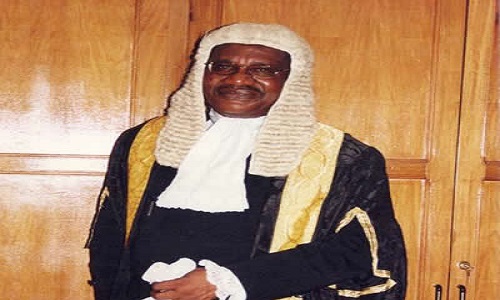 A prominent human rights activist and legal scholar, Professor Itse Sagay (SAN), has charged the Economic and Financial Crimes Commission (EFCC) not to be weighed down by the personalities and the numbers involved in the ongoing investigation into the $2.1 billion arms scandal.

Sagay, who is Chairman of the Presidential Advisory Committee against Corruption, advised that the probe should be pursued to a logical conclusion with everyone involved brought to book.

According to the Professor of Law, the revelations emanating from the probe were alarming and frightening.

Speaking in Lagos on Sunday, the elder statesman said the $2.1bn arms deal involving the former National Security Adviser, Col. Sambo Dasuki (retd.), is a pointer to the rot perpetrated by the immediate past administration.

Professor Sagay, however, made a case for the aged people among those mentioned in the scam, saying people who are above 70 and in their 80s should not be punished, but they should be made to refund the money collected.

“We have a very big job ahead of us to try and rebuild the country. It is unbelievable the number of people involved, people just came together to share all the resources of this country and leave the rest of us high and dry without resources. It is very frightening.

“We have to be organized, we have to be thoroughly professional about it, and above all, be steadfast. They shouldn’t say the number and status of those involved has completely overwhelmed us and so we would just let the dam bust and let all the water just rush out of the country. No. We must be steadfast.

“The more they are, the more determined we should be that everybody must answer for his action even if it takes a few years but we must be systematic and do it in an orderly, determined, resolute passion. Nobody will escape unless he has an explanation the court finds acceptable to let him go”, the constitutional law expert stated.

Sagay, however, welcomed the return of looted funds by those whose names were mentioned as beneficiaries of the arms deal scam, saying that option would provide a soft landing for them