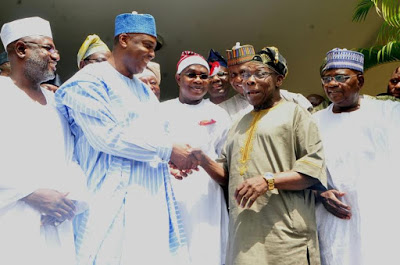 Senate President Bukola Saraki has reacted to a letter written by former President Olusegun Obasanjo accusing the National Assembly of insensitivity to the plight of Nigerians, saying the 8th Senate under his leadership is committed to good governance, transparency and accountability.

Obasanjo had in a January 13, 2016 letter to Saraki and Speaker of the House of Representatives, Yakubu Dogara, accused the National Assembly of corruption, impunity, greed and of repeatedly breaking the nation’s laws.

The former president specifically accused the lawmakers of fixing and earning salaries and allowances far above what the Revenue Mobilisation Allocation and Fiscal Commission approved for them.

Reacting to the letter via his verified Twitter account, Senate President Saraki assured Mr. Obasanjo that the leadership and membership of the 8th Senate are committed to good governance, transparency, accountability, due process and responsiveness to the economic reality of the nation.

He said it was in recognition of its responsiveness to the present economic realities that the legislative chamber introduced bold and progressive reforms in the management of the finances of the National Assembly.

“This is of even greater importance during a tough fiscal period for our country. Like i said during my closing address at the plenary after our debate on the 2016 Budget, the Senate must lead by example in terms of our own funding, budgets and accountability – showing, beyond doubt, value for money”, Saraki said.

He continued: “I have canvassed that we must lay bare the budget of the Senate, nay the National Assembly and its affiliated institutions.I equally canvassed the need to strengthen the capacity of the legislative institution to carry our effective oversight of the executive arm so that we can ensure the budget leads to the realization of the policy objectives of the Buhari Administration.

“Again, let me reiterate my position in the speech i made this morning on the need for us to work towards blocking all areas of revenue leakages while also strengthening the anti-corruption agencies so that the little resources that are now available will serve the interest of the overwhelming majority.

“As a former President and a father of the nation that we all hold in high esteem, I intend to reply the letter and outline the actions the Senate is taking to address his concerns.

“In conclusion, I appreciate President Obasanjo for his consistent role in always reminding those of us in government about our responsibilities to the general public and offering timely advise where necessary”.